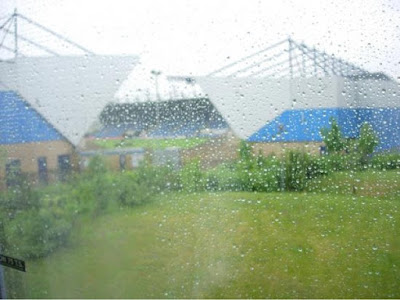 The transfer window is opens and we’re in the unusual position of actually having players other clubs might want. For a club like us, that fills you with dread because there’s a sneaking suspicion that you won’t be able to replace them. It's not as if we can just plough into the market and pick sign another Kemar Roofe. January is going to be an anxious month. So, who may be of interest to other teams, and what are the prospects of them going?

There’s a lot of hype around Roofe; he scores goals, spectacular ones, and he has two songs about him, apparently Newcastle United are interested. Roofe himself hasn’t been as prominent in recent weeks; partly because he’s playing on the wing rather than down the middle. Plus, while he’s quick and skilful, I’m not sure he’s that different to others out there; I’m no expert, but there’s a reason why West Brom put up so little fight to keep him. I don’t think Premier League clubs are going to take an interest, but I can see Championship clubs sniffing around. There was a suggestion that Hull might be interested, which I think sounds very credible as to the type of team that might try to sign him.

Sercombe’s surging runs through midfield give us a dimension we’ve not had in years, he also scores goals. One of those anonymous Twitter accounts said there were a few Championship clubs taking an interest. I can see why scouts may turn up to the Kassam to get a better look at Sercombe, but they’re watching players all the time. Again, I’m not sure; Sercombe has been on the scene for quite a while with 8 years at Exeter before coming to us. Are clubs going to take a punt based on half a season in a successful team? Plus, he’s on a contract and will cost a fee.

Lundstram was a bit of a surprise signing for us; he’s played at a good level for England and although he was injured, it wasn’t as if it was career threatening. An Everton fan friend of mine says he was well regarded at the Toffees and earmarked as another to roll off their talent conveyor belt into the first team like John Stones and Ross Barclay. I do think that in a sense we got lucky and he’s playing at a level below which he’s really capable. He’s still young and well schooled. I can’t quite see a clamour for his services, but I judicious financial bid may see him leave.

He’s one of our own; and he’s got the temperament and skill to forge a very successful career at the top of the game. Is he ready? We don’t play him regularly and Michael Appleton has mentioned a couple of times that he’s been left out of games because he’s exhausted. Clubs will certainly be interested in O’Dowda, I’ve no doubt about that. I don’t know about January, there’s an outside chance of someone buying and loaning back just to secure his services at a later date, but I don’t think he’s going to fill a gap in anyone’s first team at a higher level yet.

He’s not one of our own. Baldock is perhaps the best player in his position in League 2, perhaps in the bottom two divisions. Plus, while the club might be prepared to put up a fight to keep their names, they have no such option with Baldock. I can see a bid coming in for him from a team at League 1 or maybe even the Championship, and I can see MK Dons cashing in on him, because for reasons I can’t quite fathom, they don’t seem to want him. The question is, I suppose, if a bid does come in, will we take on the fight to keep him?

Nobody has talked about Appleton leaving, but a couple of managerial movements recently has got me thinking whether he might, eventually, fall into the frame somewhere. There’s no transfer window with a manager so there’s much more opportunity for him to move. He’s well schooled, of course, and well regarded. Has he shaken off any bad reputation gained from him time as Blackpool, Blackburn and Portsmouth… and even us last year? Also, will a team in trouble want an Appleton-type of coach to get them out of the crap? He’s proving a very good analytical coach, but sometimes failing clubs need more of a crisis manager to shake things up a bit. If you’re threatened with relegation, I would choose a Chris Wilder type over Appleton. However, it might be that a successful club with a good infrastructure further up the chain find themselves with a vacancy, I can see Appleton being approached in that situation.

Posted by Oxblogger at 7:00 AM