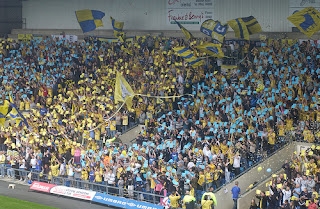 Oxblogger is a blog about Oxford United. It doesn't do match reports, if you need to know who scored what, when and how then I recommend that you read Rage Online or the Official Oxford United Website. It is not authoritative, comprehensive or consistent, it is entirely personal; which is just how a blog should be, in my view.

It started in 2006 after the club were relegated from the Football League. That seemed a good time to start a blog about the club - its original aim was to track our progress to a European Cup win some time in the future - that is, from its lowest to its highest point.

This was inspired by Arseblog, which tracked Arsenal's progress including and beyond their 2006 European Cup Final appearance. It was also inspired by Manchester United's 1999 European Cup win on the basis that someone in the stadium that night must have also endured their 1974 relegation to the 2nd Division - the journey from that low to that high seemed a good one to document. We haven't quite made it yet.

The 2014/15 season was the worst I’ve ever seen. For the first time in nearly 20 years I missed a home game that I could feasibly have attended. I did that twice.

This blog suffered; writing became a chore, the posts became long, repetitive and self-indulgent. I want to get to 10 years, but I don't know if I’ll make it or simply die of boredom.

So, to breathe new life into the blog I’m taking a different approach for 2015/16.

My aim is to focus on shorter, punchier posts, built around a structure that allows me to write rather than think.

Coming up - Not a preview, an aperitif for our next game. It may just be a YouTube clip or a reference back to a previous blog post and there maybe a bit on the game itself.

Match wraps - Not a match report, others do that better than I can, but an immediate reaction to the result and what it means.

Maths of the Day - Well, the month rather than the day, but the pun doesn't work. A few graphs and stats, just because I like a bit of that stuff.

Opinion - I reserve the right to write long winded, self-indulgent stuff, but only when the mood takes me and there’s something to write about. My blog, my rules.

It may be that this plan will collapse around my ears. Perhaps it’s the start of something new and interesting (for me, at least) or perhaps it’s the final death throes before the blog. Who knows?

I have some other ideas to bring into the mix, which I will introduce as and when I’ve thought them through.