Why we should welcome Adam Chapman 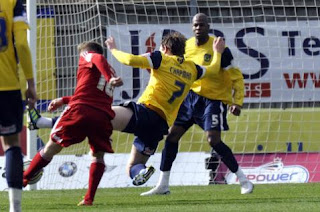 Adam Chapman returned to the starting line-up for last night's 2-2 draw with Shrewsbury following an impressive display against Swindon. Some will say that he should never have been given the opportunity. I think they're wrong.

For an insight into professional sport you could do a lot worse than reading David Millar’s Riding through the Dark. Millar is perhaps the most naturally gifted cyclist this country has produced in a generation. Developed almost completely outside the gold medal factory run by Dave Brailsford at British Cycling, Millar rose from local racing amateur to world time-trial champion.

In the process he evolved from wide-eyed romantic to cynical professional. Eventually, he was busted for doping in 2004, served a 2 year ban, but has since returned to become a leading voice in the fight against drugs in sport.

His drug taking wasn’t ‘evil’ or cheating a system, as he saw it at the time. It was widely sanctioned and accepted within his sport. He was fulfilling an obligation to sponsors, team owners, the media, race organisers and even fans. If he was seen failing, or not competing because of tiredness or injury, then he wasn’t fulfilling his professional obligation. He could sustain his performances with drugs and because everyone else was doing it too, it was just all part of the business they don't call 'show'.

This, he now realises, is a pointless and facile crusade. As much as people want to watch and enjoy sport, they don’t want to be thinking about the drugs that are making it happen. If the Corinthian spirit isn’t in some way evident, sport is a waste of time. We want to see people struggling to achieve, achieving without struggle is boring.

But professional sport, he says, does not do rehabilitation. It’s a world in which coming second is considered first loser, it has no mechanism for helping people recover from failure or triumph over adversity; whether than be illness or injury, cheating, or in Adam Chapman’s case, killing a man.

If sport has a compelling narrative it is triumph over adversity. That is why Manchester City and Chelsea are so utterly tedious; they’ve bypassed adversity with their money. Conversely; Lance Armstrong would have been forgotten had he been a Texan gobshite who got cancer and just died without winning 7 Tour de France titles. Both sides of the struggle/success equation are needed in order to make sport worthwhile.

Oxford should be applauded for keeping Adam Chapman on the books and accepting him back into the club following his release from jail. This isn’t a hero’s welcome, although inevitably some will treat it as such; there is no heroism in what he’s done. However, it gives him a platform to rehabilitate. After the Swindon win, Kelvin Thomas talked about Chapman as 'looking like a man out there'. Which is the whole point of rehabilitation. Time will tell, but there are good signs that he's grown up and come back a more mature professional.

It will be interesting to see if Michael Duberry has any influence over Chapman as someone else who has triumphed over adversity. Another rehabilitated yellow; Billy Turley, provided essential support for him in the run up to his trial. If Chapman comes back, does well and goes on to have a great career, he has not 'got away with' what he’s done, he has shown people a path that many don’t believe is there. Without rehabilitation the only route available is a desceding loop of crime which narrows what is considered to be achievable. The club’s support of Chapman allows a story of redemption to play itself out, and that’s got to be better than throwing him on the slag heap.
Posted by Oxblogger at 9:05 AM