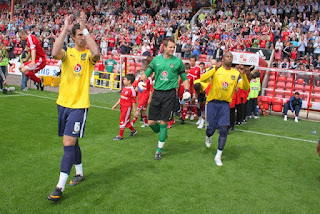 The first ever FA Cup tie between the sides was shown live on TV. The BBC, constrained by their contract to show games from the early rounds, seemed shocked to discover a game that had purpose and meaning.

The ground was full and noisey, into the cauldron of hate entered an insane warrior with a maniacal look on his face, the tension that had hung over the fixture exploded, spitting its venom across the stadium. Weeks of malice, weeks of fans exchanging abuse, and now this. He sprinted unabated at the Swindon fans shaking his fists? A man hiding behind an allegiance to a football club, kissing the badge on his shirt, hollering his manic ramblings through his beak.

Ronny the rocking Robin was Swindon’s mascot; a six foot three inch robin sprinting around, sliding on his knees, banging on advertising hoardings and leading the away fans’ singing. Quite frankly, he pissed all over Ollie the Ox.

You've got to give them their victories when they deserve them, I suppose.

Three years earlier I’d stood on the terraces at the Manor with chest pains as we narrowly avoided relegation. A year later we shipped 100 goals, were relegated by April and I was shrouded with a simple gloom. I'd been feeding my habit with an evermore dirty, diluted drug. Each time I used it I hoped for one of those old buzzes, each time I was left sullied and unfulfilled.

Ten minutes before  kick-off the air was filled with Two Tribes by Frankie Goes To Hollywood, it was ear splitting. Then they put on some Euro pop and the stadium began to jump, the whole place began to sing, and wave, and dance. The stand shuddered under my feet. That used to happen at the Manor, but that was because it was about to fall down, this was because there was a wall of noise enveloping the whole stadium.

A lump came to my throat.

I'd watched Oxford since I was three, seen them at Wembley, seen them beat Arsenal, Manchester United and Chelsea but in the last four years I'd watched the club die under the weight of crippling debt and piss poor karma. I stood on the terraces seeing the sands of the club's life slip through my fingers. Then, suddenly, it woke up again, and I had no idea how much it meant to me.

We hadn't even kicked off.

We played like an away side, absorbing pressure – although we were top of Division 4 at the time, Swindon were flying high in Division 3. At half time Mark Lawrenson urged Oxford to show some ambition. The game was there for the taking.

We didn’t. Ian Atkins’ teams didn’t do that. We played for territory in the hope that the platform of a set piece might offer an opportunity. Just after the hour mark Scott McNiven lobbed a throw into the box which was flicked on by Jefferson Louis. Steve Basham ghosted across the six yard line, but failed to make contact, the inadvertent feint deceived the Swindon keeper and the ball bounced gently into the bottom left hand corner.

We’d secured another famous win. There was delirium. The 3rd Round draw plucked out an away tie at Arsenal. The team showed their decorum with Louis jumping butt naked through the Oxford dressing room. Characteristically, Atkins responded to the draw with something like ‘I feel like a 5-4-1 coming on’. A joke for the football tactics nerds, which says it all really.

I thought this was the beginning of the big revival. Firoz Kassam had actually got it right. He’d taken a lot of flack getting there, but I began to think that perhaps he was deserving of his success.

But, once an alcoholic, always an alcoholic, it proved a mere moment of sobriety before the grip of our disease tightened once again. The derby was once again packed away, this time for nearly a decade, the longest of hiatus of them all. We headed off to the wilderness, they were stuck in lower-league meaningless.

In 2011 the rivalry roared back, stronger than ever. The parallels with 1996 are evident, both sides entered the season with aspirations of promotion and we had another toy to squabble over. For Beauchamp read James Constable, who Swindon relentlessly, and unsuccessfully, pursued. We won at the County Ground – but I’ve done that to death already.

Which takes us up to Saturday. Over the last 17 years – since the tumult of the 1995/6 promotion season - Oxford have edged the head to head results, whereas Swindon have enjoyed  more overall success, which is not saying much. Which is more important depends on your viewpoint, of course. For me, a derby is all about the head to head, but I would say that.

The derby is in rude health; both sides are on an upward curve and we’ve had a jolly good squabble over James Constable, which will surely be a focal point of Saturday’s fixture. We’re losing key players hand over fist and Paolo DiCanio offers an angle to the disinterested media. It augers well for an absolute ripsnorter.
Posted by Oxblogger at 8:00 AM

Email ThisBlogThis!Share to TwitterShare to FacebookShare to Pinterest
Labels: History of the Swindon Derby, Swindon Town