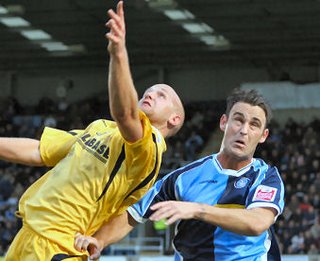 There's rarely a fair result, it's more that there is a range of fair results from which one will derive. In yesterday's case, the fair result ranged from a defeat to a draw. It wouldn't have been unjust to come back for a replay, but we didn't quite offer enough for the win.

We lacked a creativity in midfield; although had Andy Burgess been fit, I fear we may have been a little on the soft side in this department. His absence allowed us to be strong and compact, but though Eddie Hutchinson looked better again, there wasn't enough craft to release Yemi and Basham. We certainly missed Duffy, not for his goals specifically, but for the lack of options. You suspect Duffy and Basham would have softened up the Wycombe centre backs and there would have been an opportunity late in the game to introduce Yemi to press any advantage home

There was no gulf, and Wycombe are a strong side, but there was little venom. It's a derby in geography alone; there isn't the ire that you want games like this to have. The rivalry is more socio-economic - who is higher in the division - than cultural and is probably what makes Wycombe such a nice, but ultimately dull, club.

There seems to be so little about them; the music before the game was Harry J All Stars – Liquidator, a Wolves staple, Daydream Believer (Sunderland); and I wonder what they'll play when they score... what a shock it's Tom Hark by the Piranhas. Nothing about them is particularly unique, nor particularly offensive. Perhaps this makes them the ultimate post-modern club but like house prices in High Wycombe, Wanderers' rise seems to have resulted more from macro growth trend rather than anything else. For the Us to muster 1,835 away fans for a derby feels like we're engaged in some sort of football community service than battling for local pride.

Jim Smith, before the game, said the objective was to get to the third round, get Manchester United away, take the money and run. That may have been the stretch target, but perhaps the key requirement was to register our presence in this year's competition and then go out without derailing the bigger objective. Job done in this respect.
Posted by Oxblogger at 11:35 AM